The UN has declared 2016 the International Year of Pulses. Could we really heal the world with dried peas, beans and lentils? The founder of Salt Spring Seeds Dan Jason sees incredible potential in these versatile superfoods - and he is in very interesting company!

First of all though, pulses deserve to be appreciated as members of the legume family that have been cultivated for thousands of years. In his wonderful new book The Power of Pulses, Jason praises these nutrient-dense plants as “the epitome of renewable energy.” They are nitrogen fixers, so actually increase soil fertility. They can be grown organically anywhere with very little water, and are both “the food you eat plus the seed for next year's crop.” A recipe for food security if ever there was one!

The Power of Pulses is a must read for anyone thinking about growing, harvesting and eating their own. But along with gorgeous photos, the book includes 50 organic wholefoods recipes that simply inspire the inclusion of far more of these nutritious plants in our diets. Jason is very serious about addressing climate change so of course there are no meat dishes included. This long-time organic grower is well aware of the UN Food and Agricultural Organization's findings that livestock production alone is responsible for more GHG emissions globally than all transportation combined - approximately 18% of the total (considered by some to be a very conservative estimate).

A growing number of culinary entrepreneurs concerned about climate change, as well as the widespread pollution and cruelty connected to animal agribusiness, are finding a way to meet many food-lovers half way. They are creating alternative products with the help of pulses and other plants that so closely resemble the taste and texture of animal-derived meats that even devout carnivores are won over. The CEO of Beyond Meat, Ethan Brown, is proud of the fact that his 'Beast Burger' also packs more protein than beef and more omegas than salmon. But what about the taste? “Fooled me badly,” admitted New York Times food columnist Mark Bittman. “Livestock is an outdated technology,” Patrick Brown of Impossible Foods has declared. His latest creation is poised to go head-to-head with conventional ground beef in the mainstream marketplace with investors like Bill Gates behind him. As Dan Jason notes in his new book, “There are some excellent processed pulse products already and it's strikingly clear that one of the best slow foods around has the potential to take over the fast-food market.” 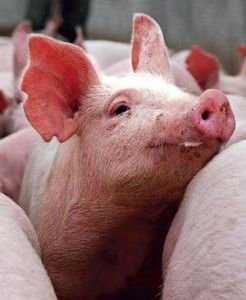 The old guard is paying attention, determined to protect its turf. “Vegan Butcher - Just Plain Wrong!” reads a headline in the National Hog Farmer. The editor of the 50-year-old business magazine for the U.S. pork industry seems to have found it noteworthy that a small-scale, 100% plant-based meat shop managed to attract some 5,000 patrons over its recent weekend-long grand opening in Minneapolis.

The Herbivorous Butcher is serving up cruelty-free versions of the kinds of sausages, barbecue ribs, pepperoni, chorizo and other meats customers would find in a traditional butcher shop. Pulses, other beans and grains are key ingredients in  their recipes. And it seems that just doesn't sit well with  National Hog Farmer editor Cheryl Day. She argues that a butcher is supposed to be a person who “harvests animals and handcrafts the meat into desirable cuts we all love to devour.” Totally missing the irony in her statement she continues, “I think that is some special kind of creative word-smithing and marketing, right there...just plain unethical and wrong on all levels.” She could choose to reflect instead on the fact that over 100 million pigs are killed for food in the U.S. alone each year (over 30 million in Canada) - 99% of which are raised on factory farms. But Ms. Day ponders: if meat “is such a bad thing, then why mimic it? If the term [butcher] is so negative, why use it as your brand?“

Aubry and Kale Walch, the sister and brother duo behind the Herbivorous Butcher, are in effect 'repurposing' the word. Their offerings cater to the palates of people who enjoy the taste of meat – not the fact that it was once a somebody. It isn't their goal to encourage people to forget the animals spared. “We're here to bridge the gap so that omnivores can switch over,” Aubry told a reporter with the UK Guardian. Added Kale, “we'll stop calling ourselves vegan butchers when they stop calling it 'humane slaughter'.”

'Mock meats' have actually been around for a very long time. They date back at least as far as 13th century China when Buddhist monks had already mastered the art of flavouring wheat protein. But thanks in significant part to the versatility of pulses, today's culinary wizards are taking food science to a whole new level. High stakes competition in the marketplace should guarantee that we see ongoing improvements in the selection of healthy varieties of prepared convenience foods meant to replace animal products of all kinds.

Thanks to Dan Jason for reminding us through The Power of Pulses, however, that these nutritious plants can help us both reduce our ecological footprints and embrace more compassionate choices by simply making their way into our own home-made fare. Any of the vegetarian recipes included by co-conspirators Hilary Malone and Alison Malone Eathorne are easily veganized. Look for Salt Spring Seeds at Seedy Saturday in Vancouver on Feb. 27th, in Courtenay on March 5th or at Seedy Sunday in Nanaimo on March 6th (as well as at other such events throughout the region). Jason carries hundreds of varieties of heritage and heirloom seeds, including over 70 varieties of pulses to get excited about! 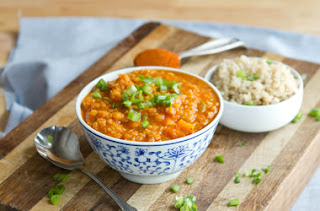 INSTRUCTIONS:
Sautee, stirring the ginger, garlic and onion lightly in oil. Rinse, then add the lentils with spices, coconut milk and water. Cook covered for half an hour over medium heat, stirring occasionally to avoid sticking. Test for seasoning, add a bit more water if required. Delicious served with brown rice and a side of steamed greens. Bon appetit!
For additional recipes & references for this month's column please visit the FEBRUARY 2016 LINKS, on the right hand side of this page.
Posted by Islander at 7:05 PM