by Fireweed for the Island Word, September 2016 issue


Did you know that for five centuries in Europe, pigs (and other farmed animals) could actually be arrested for a perceived crime, then tried and convicted in a court of law?

We tend to think of granting moral agency to other species as a contemporary phenomenon, but historian James McWilliams thinks that recognizing certain animals as individuals with unique personalities came more naturally to people in pre-industrial agrarian societies. Living in such close proximity to those they raised for food and other uses would have fostered what McWilliams refers to as “observational intimacy.” The resulting projections made by our ancestors onto the animals they still chose to dominate may befuddle us, but McWilliams' research into these odd trials is telling – somewhere along the way we lost our ability to empathize with farmed animals as sentient beings.

It has been suggested that speciesism predates all other forms of domination, but we can certainly credit industrialization for a shift in attitude towards our fellow earthlings that has profoundly deepened that divide. Through automated exploitation existing on such a massive scale that any semblance of individuality is routinely disappeared and rendered irrelevant, factory farms produce almost 99% of the animal-derived foods consumed today. Animals have become “Ghosts In Our Machine”, described by Professor Will Kymlicka in reference to the documentary film by Liz Marshall, as “ubiquitous but invisible members of the community: essential in its functioning; the creators of its wealth, utterly governed and regulated by its laws and policies; and tyrannized by complete absence from political representation or participation.”

In a contemporary Canadian courtroom, however, pigs were recently afforded long overdue consideration thanks to a case that has generated international media attention. As reported previously in this column, activist Anita Krajnc was charged with criminal mischief last year for an act of mercy - providing water to over-heated pigs in the transport truck delivering them to a slaughterhouse in Burlington, Ontario. During the trial (now scheduled to reconvene on October 3rd), Anita and her legal team have been exposing the cruelty inherent in treating animals as mere commodities - not like someones, but somethings.

For animal activists around the world it is the pig farming industry that is every bit as much on trial here - and the hypocrisy inherent in upholding some animal lives as worthy of protection while others count for nothing but profit. The BC SPCA's recent request for the public's assistance in finding whomever is responsible for leaving a deceased dog in a Coquitlam dumpster is one tragic case in point: that poor animal was determined by autopsy to have died from hyperthermia. There is no sound explanation why the lives of thousands of pigs found dead on arrival after transport in extreme temperatures each year throughout Canada should matter any less. Our laws are unjustly discriminatory. All pigs are as aware and sensitive to their surroundings as the companion animals we rightly treasure - none deserve to either suffer or die prematurely.

Whether or not the court sentences Krajnc to jail time, Toronto Pig Save (the group she co-founded) will continue to hold vigils like the one that led to her arrest. Solidarity actions are taking place around the globe with new Save groups motivated by Krajnc's commitment to “putting personal faces on the nameless numbers.” Krajnc believes strongly that the act of bearing witness to injustice is a moral obligation. She is inspired in part by the Russian non-violence advocate and celebrated author Leo Tolstoy - “When the suffering of another creature causes you to feel pain, do not submit to the initial desire to flee from the suffering one, but on the contrary, come closer, as close as you can to she who suffers, and try to help her.”

We've just completed our community organic potato patch harvest for another year here on Denman Island, and mmm...mmm, those spuds are delicious! Russians love their potatoes too, and in honour of vegetarian revolutionary Leo Tolstoy, the following variation on a theme is 100% vegan delicious! 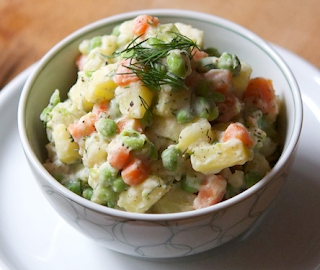 INSTRUCTIONS:
Boil cob of organic corn for 3 minutes. Remove from pot. Dice carrots & potatoes into roughly 1/2 inch pieces & cook or steam until fork tender only. Set aside to cool. Chop pickled cucumber & onions. Whisk together wet ingredients in a large bowl. Add seasonings. Use a sharp knife to remove corn kernels from cob. Fold all cooled & chopped veggies together gently into the dressing. Add peas (can be raw or steamed). Cover and refrigerate for at least an hour. Remove at least a half an hour before serving and add additional seasonings to taste. Gently fold in chopped sausage, and transfer to serving dish of choice on a bed of romaine lettuce leaves. Prijatnogo appetita!

SUBSTITUTE: Replace the store-bought vegan mayo and soy yogurt in my 'quick and easy' recipe above with the following creamy deliciousness! Soak 3/4 cup of raw cashews in warm water for a few hours. Pat dry, then combine in a blender with 1/3 cup olive oil, about 3 T of fresh lemon juice, 1 tsp of rice vinegar, 3 - 4 T of nutritional yeast, 3-4 T of almond milk, 2 tsp. Dijon mustard, 1 T dried dill, 1.5 tsp sea salt and 1.5 tsp black pepper (more to taste). Pulse blend until smooth. If you have a high-powered blender like a Vitamix, toss in raw cauliflower to expand volume, blend again and correct seasonings!