by Fireweed for the Island Word, March 2017 issue

The air brakes on the live animal transport truck that had just pulled up in front of me at the busy intersection let out a loud hiss. Startled, I stepped back, fumbling with the settings on my camera. Better prepared witnesses advanced, swiftly documenting some of the frightened animals crowded
together inside the vehicle. Only
moments later we were watching it disappear through the gated entranceway to Fearman Pork Inc., one of the largest slaughterhouses in Ontario. Billowing white plumes of steam mark the site as they exit chimney pipes towering high above scalding tanks inside the windowless complex. They are as hard to miss as the animal activists and their placards on the street holding vigil. I was heartened by the frequency of honks and thumbs up we received from drivers passing by.

'Save' vigils like the one in Burlington where I was recently visiting family promote the act of bearing witness to suffering and injustice as a means of consciousness raising about the plight of farmed animals of all kinds. 'Toronto Pig Save' events have been happening regularly outside Fearman's for almost six years now. It was here on a hot summer day in 2015 where founding activist Anita Krajnc's journey through the Canadian legal system began after she was charged with criminal mischief for providing water to thirsty pigs in the back of one of those massive delivery trucks. She hasn't stopped. A staggering 45,000 young animals continue to be slaughtered at this particular facility every week (not including those that are found dead on arrival of course - by law they are prohibited from entering the human food system). But the international media attention generated by Krajnc's act of mercy and subsequent trial has inspired nearly 200 'Save' chapters to spring up in over a dozen countries!

Within Canada's legal system animals are recognized as 'property', but Krajnc and her supporters do not accept that she is guilty of any wrongdoing. Her lawyers have argued that she acted in the public good much as renowned civil rights activists have defied unjust laws in the past out of a sense of moral duty. Expert witnesses have testified at her trial about the deleterious impacts of animal agribusiness on our global environment (including its role as a leading contributor of GHG emissions), and about the psychological complexity of pigs. As neuroscientist Dr. Lori Morino explained, for example,“Pigs are at least as emotionally complex as dogs and as psychologically complex as primates. It sells pigs short to say they are as sophisticated as a human toddler, for they are more complex than that.”

The opportunity to discuss animal personhood in a Canadian courtroom afforded by Krajnc's trial is not expected to change any of the country's laws in the short term. However, after meat industry employees in attendance allegedly scoffed at applying the concept to farmed animals the judge made his own comparison between the legal status of pigs today and those of women in Canada nearly a century ago. “Though careful not to make any legal pronouncements,” wrote Jeremy Greenberg for Ultravires, “Justice Harris suggested that, just as the Persons Case brought a long-overdue recognition of women as legal persons, so too might the law eventually “catch up” with the scientific and moral justifications for animal personhood.” That Burlington courtroom is sure to be packed once again on May 4th when the judge is scheduled to deliver his verdict!

We arrived home from Ontario already mourning the death of a special feline companion who had unexpectedly passed away during our absence. Our one remaining cat was so distraught that he meowed incessantly for nearly two full days. Clearly missing his buddy as much as we are, it has taken lots of extra loving to calm and reassure him that we will all get through this loss together. The significance of the bonds that nonhuman animals share naturally with one another (and sometimes with the two leggeds they adopt as their own) is so obvious when we are paying attention.

In “The Pig Who Sang to the Moon”, author Jeffrey Moussaief explores how love, loyalty, friendship, sadness, grief, and sorrow are shared by all domesticated animals. And as the slow pace of evolution would have it, these sentient beings are still very little removed from their wild ancestors. Hence, the animals we farm have all the emotions that belong to wild animals who live under conditions of freedom, says Moussaief. “This means that confinement is going to be all the more painful for farm animals, conflicting as it does with emotions that evolved under far different conditions.”

Vested interests in the commodification of animals will of course continue to oppose their liberation from human servitude for the foreseeable future. But so will the peaceful heroism of Anita Krajnc and the 'Save' movement continue to shine a light on speciesism - arbitrary discrimination that affords greater protection for some animals over others no less deserving of freedom from harm. 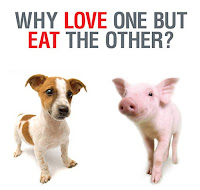 May your April be a joyous time of new beginnings. Here's a delicious 100% plant-based entree sure to please the entire family!

Instructions:
Rinse, strain and boil lentils in 3 cups of water with a little salt until slightly over-cooked. Mash. Toast walnuts at 325 F for about 8-10 mins. Set aside and boost oven to 350 F. Whisk ground flax with water in a small bowl and set aside. Sautee garlic & onion in a little olive oil for about 5 minutes. Season with salt. Add your diced celery, shredded carrot and apple, and raisins. Sautee for about 5 minutes more. Remove from heat. Mix all ingredients together, adjusting seasonings to taste. Grease a loaf pan and line with parchment paper. Press mixture firmly into pan. Whisk glaze ingredients and then spread half on top of loaf. Reserve the rest for a dipping sauce. Bake at 350 F for 40-50 minutes, uncovered. Cool in pan for at least 10 minutes before transferring to a cooling rack. Slicing this loaf is easiest when it has completely cooled. Bon appetit! 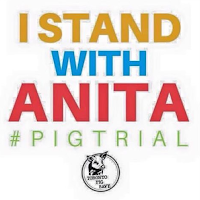