From under the cover of darkness they come... first one by one, then by the dozen! Hundreds upon hundreds of jack-o-lanterns will line Highway Four between Cathedral Grove and Port Alberni once Hallowe'en has past. It's a tradition now for mid-islanders to abandon their creative carvings there, and for travellers passing through to marvel at the spectacle - at least until the bright orange squash morph into mush.

In 2008, Port Alberni resident Jake van Kooten grew the world's largest pumpkin, which weighed in at a whopping 1,536.5 pounds. Last year, Quebec farmer Jim Bryson and his daughter Kelsey claimed the 2011 title, tipping the scales with a 1,888.5 pounder! The latter was transformed by the talented New York sculptor, Ray Villafane, into a spooky Hallowe'en zombie display for the New York City Botanical Gardens.

It's hard not to wonder how many people could be fed from annual harvest bounty never actually destined for the dinner table. At least jack-o-lanterns donated to a gardener's compost pile can return nutrients to the soil and benefit some future meal. 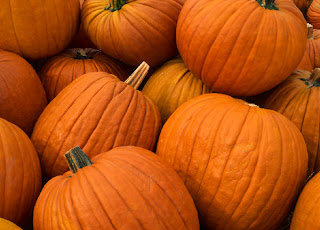 Kept in a cool, dry, and dark place with adequate ventilation, whole pumpkins and other squash can be stored successfully for many months. Whether your pumpkin has been grown or purchased for food or fun, hang onto those seeds! They are high in protein, Vitamin A , calcium and zinc, along with other important vitamins and minerals.

Variations of pumpkin and other squash have been an important food source in the Americas for thousands of years. Even before the cultivation of maize (corn), they were grown by ancient farmers along rivers and streams with sunflowers and beans. Once maize was introduced in North America, the sacred triad known as the “Three Sisters” formed a foundation for sustainable farming communities, providing long-term soil fertility and a healthy diet to generations.

Roasted in strips over campfires, baked, boiled or parched, the squash plant has helped indigenous peoples survive long, cold winters for millennia. The dried flesh was ground into nourishing flour. The seeds were eaten and also revered as medicine. Columbus apparently brought pumpkin seeds back to Europe but failed to embrace their value as food for humans. He used them instead to feed pigs.

This wasteful practice of 'feeding people twice' has become ubiquitous with the meat-centric agricultural practices of our modern era. 99% of US meat production involves feeding livestock crops grown on arable land that could far more efficiently grow plants to feed people directly. According to the World Watch Institute, producing just one calorie of flesh this way - beef, pork, or poultry - requires 11-17 calories of feed. And yet we know today that eating animals or animal byproducts is far from necessary for our survival. On the contrary, we now understand that the nutrition of greatest benefit to our human bodies comes directly from plants wherever a varied plant-based diet is accessible to us. 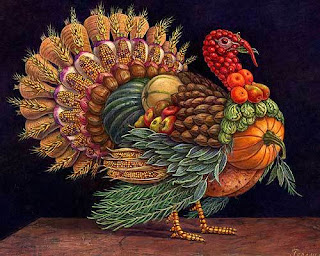 Dr. Rita Laws advocates for a return to 'the way of the corn', embracing the ancient wisdom of the Three Sisters in her essay, Native Americans and Vegetarianism. “Among my own people, the Choctaw Indians of Mississippi and Oklahoma, vegetables are the traditional mainstay,” she writes. “The principle food, eaten daily from earthen pots, was a vegetarian stew containing corn, pumpkin and beans. The bread was made from corn and acorns....Many of the Choctaw foods cooked at celebrations even today are vegetarian.” Laws goes on to exclaim how ironic it is that Native Americans are primarily (and generically, I would add) associated with hunting and fishing when, in fact, “nearly half of all the plant foods grown in the world today were first cultivated by the American Indians.”

The first Canadian Thanksgiving took place in Newfoundland 43 years before the Pilgrims landed at Plymouth Rock. But while American Thanksgiving is commemorated on a later date in the harvest season (and a shameful history of land theft and genocide continues to be swept under the rug in each country), both holiday feasts remain naturally wedded to the proverbial pumpkin. If we wish to focus on giving thanks for the blessings of seasonal abundance it really makes far more sense to give squash centre stage than it does to sacrifice a poor turkey. Not only did pumpkin as a dietary staple help its original cultivators survive and thrive, introducing this fruit to the diets of early 'New World' settlers saved many from death by scurvy and starvation. Recorded in Pilgrim verse, circa 1633: “We have pumpkins at morning and pumpkins at noon, If it were not for pumpkins we should be undoon.”

On the old Celtic calendar, Hallowe'en signifies the dying of the old year and the beginning of a new seasonal cycle. Traditionally it is a celebratory time of transformation. Whether contributing a savoury squash dish to a communal harvest feast this month, marking All Hallow's Eve with a festive jack-o-lantern or enjoying the Celtic New Year with a sweet pumpkin pie, what better time or way to embrace a more plant-centric worldview?!

To prepare pumpkin seeds for roasting, rinse off the pulp and pat dry. Lightly rub on a wee bit of oil, and some seasoning if you wish. Spread the seeds over parchment paper on a cookie sheet for a low temperature bake (in a 250 degree oven for about 50 minutes), and stir often. Of course raw organic seeds - soaked, then regularly rinsed and drained - make wonderfully nutritious sprouts. 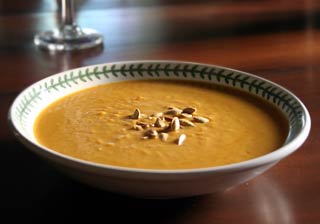 Cut your pumpkin in half, scoop out the seeds, then quarter. Rub lightly with a little oil (or not), and roast in a 400 degree oven for about half an hour or until fork tender. Cool, then remove the skin. Dissolve an herbal veggie bouillon cube in water. Place the pumpkin in a blender with sauteed onion, the bouillon broth, and seasonings. Add more liquid if required, then transfer to a soup pot. Gently stir in milk over medium heat, sweeten and correct seasonings to taste. Garnish with your oven-roasted pumpkin seeds, and serve. Bon appetit!