by Fireweed, for the Island Word, June issue, 2013

As the summer solstice rolls round once again, those of us blessed with well-watered gardens are sure to be praising the welcome warmth of the sun! Some sources suggest that the idea for Father's Day in June may have even originated with pagan devotion to the golden orb as the source of all life. 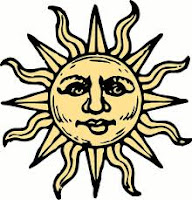 Recorded history, however, credits an American from Spokane, Washington in 1910. Sonora Smart Dodd had been moved by a sermon about parental sacrifice delivered on Mother's Day two years earlier. She was inspired to find a way to also commemorate the unsung feats of her widowed father, and his birthday was in June. It would take more than six decades for Father's Day to become permanently established in the USA, but the occasion is now acknowledged around the world. Not all countries celebrate the day quite as close to the summer solstice.

Many cultures have portrayed the sun as a masculine force, and the moon as a feminine one. In reality gender isn't binary but exists on a spectrum. However gender stereotypes reinforced through mythology and social bias still permeate many aspects of our lives, as a glance through the Father's Day selection in a card shop quickly reminds us. We are prompted to faithfully uphold the presumption that a 'manly' life revolves around competitive sports and fishing rods! Just as the energy of the sun is all-powerful, masculinity is still commonly portrayed as all about physical strength and dominance. Maintaining this 'tough guise' requires fuel. As patriarchal convention would have it when it comes to protein, meat is considered 'king'.

The widespread idea of plant protein as somehow inferior to animal-based protein is, in part, connected to gender prejudice. In “The Sexual Politics of Meat” author Carol Adams explores the history of meat as a symbol of male power. She also reveals how the association of plant foods with femininity in many male-dominated societies has underscored a hierarchical mindset that views both women and nature as subservient. The misguided notion that at least some animal flesh must be consumed in order to ensure optimum health is not all that different from the magical belief that ingesting the body parts of powerful animals will enhance a man's sexual prowess. Certainly neither notion mirrors the findings of contemporary peer-reviewed science. Both the American and Canadian Dietary Associations, for example, now endorse a varied and completely plant-based diet as not only perfectly adequate but providing health benefits in the prevention and treatment of certain diseases.

The quest for a high level of physical fitness certainly needn't be equated with machismo. But an increasing number of competitive athletes today are proof positive that a 100% plant-based diet can help achieve peak performance. Famous Olympian Carl Lewis, for example, credits a vegan diet for having enhanced his notable track record. Last year 42 year-old vegan Juliana Sproles was named the “toughest woman on the planet” after winning the grueling 24 hour-long 'Tough Mudder' competition. Retired Canadian hockey player Georges Laraque's switch to a 100% plant-based diet came after learning about the environmental and animal welfare costs of meat through the powerful film “Earthlings”. He has found himself rewarded with an increase in energy, not a lack of it.

Nonetheless, backlash against plant-based sources of protein continues to perplex the general public. Misinformation about soy includes such outrageous claims as the notion that the estrogen content of this nutritious bean is responsible for a decrease in penis size, sexual 'confusion' and homosexuality. First of all, soyfoods contain isoflavones - sometimes referred to as 'phytoestrogens' - but these are not the same as estrogen and their physiological effects differ significantly. According to numerous studies, including a meta-analysis published in Fertility and Sterility based on more than 50 treatment groups, soy foods have not been found to affect testosterone levels in men. (“Settling the Soy Controversy”, Dr. Neal Barnard, Huffington Post, Feb., 2010). Who to believe? The American Journal of Clinical Nutrition reported that an analysis of 14 studies showed increasing soy in the diet associated with a 26% reduction in prostate cancer risk. These results were consistent with the researchers earlier meta-analysis of another 8 studies about the benefits of soy consumption by men.

A truly serious and preventable problem is the overconsumption of animal-based protein wreaking havoc on individual and collective health where plant-based options are (or should be) available. It's high time to challenge the stereotypes that discourage turning away from the myth of meat in favour of better health, greater compassion for animals, concern for the environment and an end to gender discrimination of all kinds. Here's a delicious, versatile soy recipe (great for breakfast, lunch or supper) just in time for Father's Day or a summer solstice picnic. Enjoy!

NOTE: By the way, if you are in the neighbourhood, check out our next community vegan potluck here on Denman Island on June 23rd...we'll be sharing a film or two featuring men who no longer buy into the 'meat myth'! Click here for details: www.denmanpotlucks.blogspot.ca 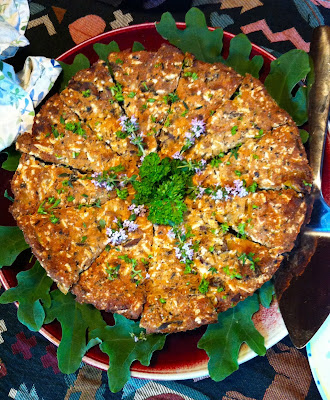 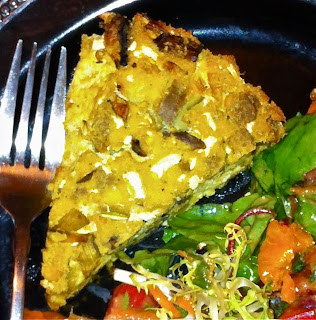 Directions:
Clean and chop the leek, roughly chop the sliced mushrooms, and sautee the whole lot in a little olive oil on medium heat. Stir to avoid sticking and burning then set aside to cool. Cut each block of tofu in half or quarters and squeeze out the excess water. Place it in your food processor along with all the other ingredients except for the vegetables and the Daiya cheese (this is a pre-shredded non-dairy vegan cheese, but you could experiment with another brand. It adds flavor and also acts as a bit of a binder- so does the chick pea flour). Blend, scraping down the sides of the food processor to incorporate all ingredients well. You don't want it to be too thin, so avoid adding additional liquid unless it is too thick to blend. Taste the mixture and add additional herbs and other seasoning if you wish.

Transfer to a large mixing bowl and fold in the leeks and mushrooms, then add the cheese. At this stage you can dress up your quiche with additional items like a little diced cooked potato, or a chopped veggie sausage. Spoon the mixture into a well-oiled glass pie plate, and press to fill. Smooth the surface with a spatula and bake in a 350 degree oven for 45 to 50 minutes. After about half an hour, gently perforate the pie in several places with a sharp knife or fork to help release moisture and firm up the contents. Allow to cool on a cookie rack briefly before slicing with a sharp knife. Enjoy immediately, or reheat and serve. This recipe also freezes well. Bon appetit!