by Fireweed, for the Island Word, February 2014 edition 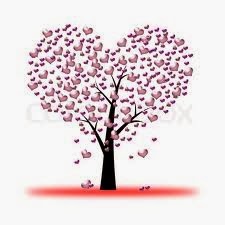 According to legend, Valentine's Day originated with a miracle in ancient Rome. A Christian priest by the name of Valentine was imprisoned and condemned to death for his unwavering religious beliefs. While awaiting his fate, Valentine is alleged to have cured his jailer's daughter, Julia, of her blindness. One version of the story tells us that the night before his execution he sent the young woman a farewell message signed, "Your Valentine." An embellishment to the tale (likely added centuries later) includes Julia planting a flowering almond tree near the martyr's grave. And so to this day the almond tree remains a symbol of abiding love and friendship!

Of course, it is the nature of legends to evolve - with colourful 'new' details adapting them to time and place. Even the shape now commonly identified as a valentine heart is most likely a composite of earlier symbols and meanings now obscured by the mists of antiquity. Scholars point to stylized depictions of female anatomy as well as leaves, flower petals, and early renderings of pine cones and seeds as possible predecessors. It wasn't until the 14th century (and the poetry of Geoffrey Chaucer) that Valentine's Day and its now popular emblem were associated with romantic love. 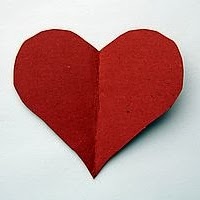 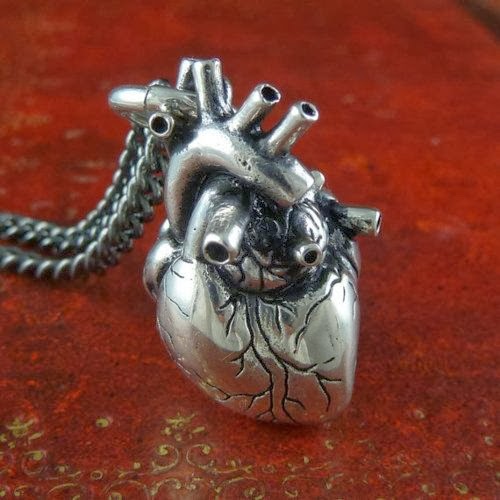 Besides the crescent moon and the cross, however, no symbol is more widely recognized on the planet today. It has indeed been co-opted by crass commercialism. But as an expression of love, warmth and approval, the contemporary heart motif is understood to represent harmony and goodwill. It also remains emblematic of the muscle that pumps blood through our veins and oxygen to our brains. Perhaps we would do well to imagine its ubiquitous presence in our modern world as a reminder of the vital connection between mental health and physical well-being! What is necessary for the soul is certainly vital to the body.

Without heart-centered relationships - without compassion for self and others - we simply do not thrive. February is Heart Month in the US, Canada and the UK where cardiovascular disease remains a leading cause of death for both men and women. General medical consensus has it that stress reduction goes hand in hand with a whole-foods plant-rich diet, sufficient exercise, and other healthy lifestyle choices when it comes to avoiding the risk factors that can lead to heart problems.

According to the Harvard Mental Health Letter (Feb. 2006), "Mind and mood affect the cardiovascular system directly by creating a state of emergency readiness, in which stress hormone levels rise, blood vessels constrict, and heartbeat speeds up. If a person is seriously depressed or anxious, the emergency response becomes constant, damaging the blood vessels and making the heart less sensitive to signals telling it to slow down or speed up as the body's demands change."

Along with practicing empathy in our human relations, opening one's heart to animals has become well established as highly beneficial to health enhancement. A ten year study through the University of Minnesota's Stroke Institute in Minneapolis concludes that cat caregivers showed a remarkable 30 per cent lower risk of death from heart attack compared to those without feline companions in their lives! Simply petting a cat or dog has been shown to reduce stress and decrease blood pressure significantly.

Recognizing the value of the human-animal bond is leading more and more people to reconsider the nature of their relationships with animals of all kinds. For example, since Ontario couple Derek Walter and Steven Jenkins decided to add a pig to their family which already included cats and dogs in 2012, the notion that animals exist in separate categories as either 'friend or food' no longer holds true for these former meat-eaters. 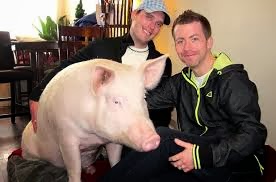 Currently weighing in at over 375 pounds, Esther the Wonder Pig is gaining renown as an internet sensation. Her caregivers mistakenly believed they were adopting an unwanted mini-pig at the time, not rescuing an animal destined for the slaughterhouse! In a matter of days both men knew they could never eat bacon or pork again. They set out to educate themselves about the animal agriculture industry and transitioned to veganism as a result.

The joy of experiencing Esther grow into a playful, affectionate, highly intelligent animal prompted the creation of a Facebook page for sharing videos and photos with friends and family last December. Walter and Jenkins could never have imagined that in less than two months time over 81,000 Facebook fans would help their story (and Esther’s) go viral! The two men hope to eventually open a sanctuary for pigs. In the meantime they are taking advantage of the spotlight to raise awareness about the problem of commercial pet pig breeding (here in BC, Hearts on Noses Sanctuary in Mission can use our support). Walter and Jenkins have also become advocates for the benefits of a heart-smart vegan diet - first and foremost out of respect for the lives of other sentient beings like Esther.

Fortunately, there is nothing human beings with the privilege of choice require for optimum health from other animals. And our heart health certainly benefits from avoiding the cholesterol and saturated fat found only in animal products. Monounsaturated and polyunsaturated fats are the good ones and they are easily sourced from plants like avocados, nuts and seeds. In the spirit of Valentines Day, here's a slightly decadent but super simple, gluten-free vegan cookie recipe to share with the sweethearts in your life! (Thanks to Shae, who believes that gratitude, compassion and love will change the world. ) 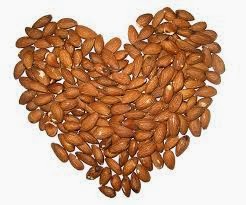 Directions:
Preheat oven to 350 degrees F. Add all dry ingredients to your food processor and pulse into a fine powder. Add the almond butter and maple syrup and process to combine into a dough. Using a tablespoon, measure the mixture into 15 cookies. Roll into balls and press onto cookie sheet, flattening with your fingers. Alternatively, roll out the dough (not too thinly) and cut using a small heart-shaped cookie cutter. Bake time is only 7 minutes, or until golden brown, so stick around!

For references highlighted in this article, past columns, recipes and more, please visit the links lists on the right hand side of this page!