-by Fireweed, for the Island Word, April 2014 edition 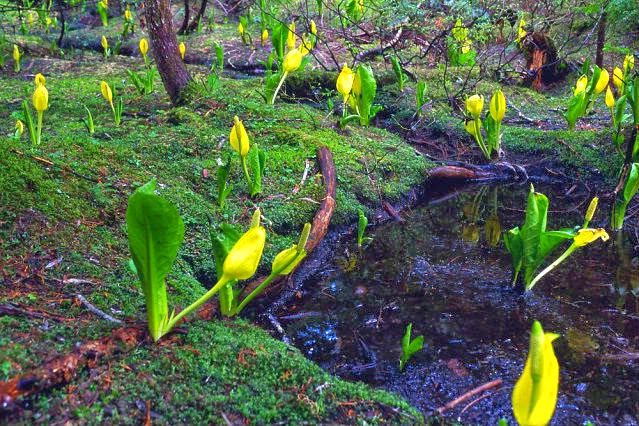 Throughout wetlands and along stream banks here in the Pacific Northwest, a large yellow flower is currently holding court. Even the leaves of the majestic skunk cabbage are bigger than anything you'd expect to find outside of a tropical rainforest! Its showy presence has affirmed the return of spring in this region for millenia.

Daffodils and lambs are also considered synonymous with the month of April on the island where I live, but these additions to the rural landscape are still relatively new. Daffodils originated in parts of Europe and Africa. Sheep, too, arrived with the first Europeans to settle here. That happened only about 140 years ago - at least 5,000 years after the Coast Salish people are known to have first visited these shores in search of food.

Skunk cabbage isn't good for eating, but its waxy leaves are ideal for drying berries. According to ethnobotanist Dr. Nancy Turner, approximately 100 species of plant foods were once harvested by the First Nations inhabitants of coastal British Columbia. For various reasons, the majority are no longer in use. Including fruits, greens, inner bark, beverages and root vegetables, these traditional foods have been among the most hugely impacted by colonization.

Only a century ago in Kingcome Inlet, for example,
Tsawataineuk women were still cultivating root gardens of silverbank clover, Pacific silverweed, northern riceroot and Nootka lupine, when a man named McKay decided to fence off the land and deny any further access. Also reported (in 1914) by Hereditary Chief Cesaholis to  the Royal Commission on Indian Affairs for the Province of BC, Pacific crab apple trees that had provided another source of food well-suited for over-winter storage were cut down by settlers. Additional elimination of traditional root-digging grounds came about through the introduction of imported livestock.

“....and then the animals of the whiteman, such as the pigs and cattle would come and eat it off, and then my forefathers and the women got tired and gave it up when they saw their food was destroyed by the cattle...” (Cesaholis 1914)

One hundred years later, the US-based Centre for Biological Diversity has just unveiled a brand new project called Take Extinction Off Your Plate. It highlights the fact that animal agriculture has become one of the main drivers of environmental destruction world-wide and calls for an immediate reduction in flesh consumption. Substituting dairy or eggs for meat is discouraged, and so is simply switching to “grass-fed” beef. Studies have shown that grass-fed cattle are responsible for far more greenhouse gas emissions than grain-fed animals – as much as 500 percent more. With over seven billion people on the planet and counting, meat production has already tripled over the last 30 years alone and could double again by 2020. The Centre for Biological Diversity's message is urgent: “there are too many people eating too much meat for any form of meat production to be considered sustainable.” 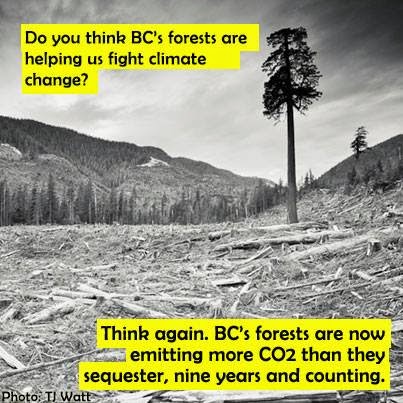 Commonly referred to as the lungs of the earth, the Amazon Rainforest continues to disappear at an alarming rate (the cleared land there is used mostly for cattle ranching and crop cultivation - including soy for animal feed.) But over half of Vancouver Island's old-growth is now gone as well, and even the BC government admits that our forests have been emitting rather than storing carbon for the last ten years. Proposed changes to BC's Agricultural Land Reserve could further reduce biological diversity and exacerbate global warming by opening the door to even more potential oil and gas development.

Today's locavore movement must begin to take a far greater interest in ensuring future food security through transitioning away from animal-based farming towards better use of existing arable land - for the growing of crops intended to feed people directly. On top of being more climate-friendly, a plant-oriented diet uses five to seven times less land than an omnivorous one, and also saves nearly 600 gallons of water per day in comparison. Examples of successful stock-free growing operations that likewise conserve these valuable resources are finally beginning to gain mainstream recognition. 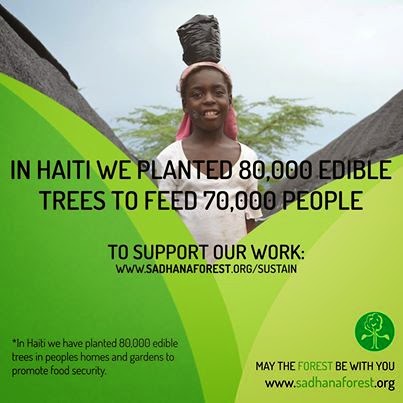 According to Aviram Rozin, founder of Sadhana Forest, water conservation and reforestation are the main ecological issues of the 21st century. Global warming poses a particularly huge threat to food security in India, for example, where over 1.2 billion people are at the mercy of increasingly severe droughts and monsoon flooding. Over the past ten years Sadhana Forest India has attracted thousands of volunteers from around the world to help heal 70 acres of severely degraded land in southern India the stock-free way. They have focused on bringing back a tropical dry evergreen forest from the brink of extinction by planting 29,000 indigenous trees, and implementing water retention methods that have increased the local aquifer by 20 feet! “Greening the planet from the grassroots,” the aim of Sadhana Forest projects (now expanded into Haiti and Kenya) is to “introduce a growing number of people to sustainable living, food security through ecological transformation, wasteland reclamation, and veganism.” 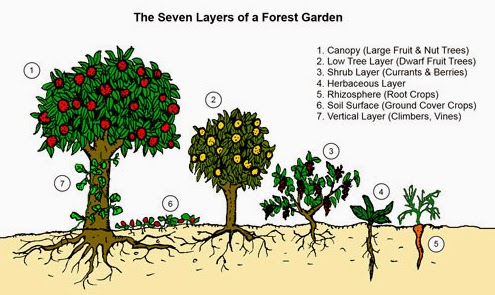 Food forests were actually an ancient means of securing sustenance in the tropics (along with fibre, tools and more), that we might think of today as “Gardens of Eden.” Designed to mimic self-sustaining, multi-storied indigenous ecosystems, they are abundant in edible plant growth from the ground up through at least seven layers into the canopies of mature fruit or nut-bearing trees. In the 1960's, food forestry principles were adapted to Britian's temperate climate by the late master gardener Robert Hart, a longtime vegan pioneer in the UK. An exciting North American example is the seven acre Beacon Food Forest just south of the Canadian/Washington State border. Free public foraging of healthy food is available on the honour system to the surrounding Seattle community. Abundant living in the coming age of the tree* is indeed here for the planting!

* “Abundant Living in the Coming Age of the Tree” was an ecological treatise published in England in 1991 by veganic pioneer Kathleen Jannaway. Visit the LINKS list for April 2014 on the right hand side of this page for more. Be sure to check out Robert Hart HERE!  To read other posts on The Transition Kitchen blog, click HERE  and you'll be able to scroll down for more:) 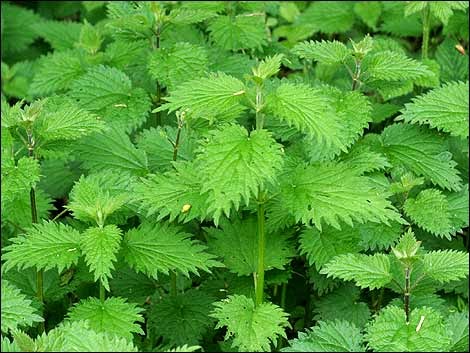 Stinging nettles are a wild local edible in the Cascadian bioregion. They make excellent fertilizer for the garden, can be dried as an iron-rich medicinal tea, and even spun into twine. Alongside skunk cabbage and salmonberry blossoms they are another harbinger of spring in my local watershed that will hopefully be here forever. They also happen to make awesome spanakopita!

Directions:
Combine crumbled tofu with nutritional yeast, miso and garlic really well by hand or lightly pulse together in food processor. Remove and fold in remaining ingredients (except nettles and pastry sheets!) Season to taste. Press liquid out of cooled, steamed nettles, chop fine, and evenly distribute into tofu filling. Brush your first sheet of phyllo lightly with a little olive oil and fold it in half lengthwise. Brush again, and spread 1/3 cup mixture across one end. Flatten a little so you make a rectangle of sorts. Brush exposed edges of the phyllo and tuck in as you fold/roll up the filling, continuing to lightly brush each layer until complete. Repeat with each sheet until you're out of filling. Place your spanakopita gently on a non-stick cookie sheet or lightly-oiled alternative surface and bake at 375 F for 12-15 minutes or until barely golden brown (you could turn up to 425 F for a few more minutes to help with browning.) Cool on cookie racks. Reheat before serving. Bon appetit!