by Fireweed, for the Island Word, June 2014 edition

Keeping a brick under a seat in your car during the warm summer months could come in handy.

Outrage over the recent deaths of six dogs from heat exhaustion in the back of a pickup truck here in B.C., Canada has been widespread. Faced with an emergency situation, it seems that plenty of people would be willing to act boldly on behalf of animals like Buddy, Teemo, Mia, Salty, Oscar and Molly. “Just snap a picture with your phone and call 911 before you break a window,” advised one dog lover on an online news site covering this sad story. Proof of life-threatening distress, her comment implied, would legitimize resorting to property damage.


The law, of course, may not necessarily see things that way. And in spite of the fact that virtually every jurisdiction in North America has laws that say animals should be treated humanely and not be made to suffer unnecessarily, Canadian lawyer Lesli Bisgould says, “These laws really don't provide protection for animals from human-caused suffering in any meaningful way.”  Now it's not that the BC SPCA hasn't recommended that criminal charges be laid in the deaths of the six dogs. And hopefully a conviction will result based on unnecessary suffering leading to death. But Bisgould points out that a lack of rights for animals means that when the law prohibits 'unnecessary' suffering it creates a corollary - meaning it permits us to cause whatever is considered to be 'necessary' suffering and then protects those activities when it comes to a staggering number of animals under human care. Since we “write the law, interpret the law and enforce it,” Bisgould explains in her 2014 University of Toronto Tedx Talk, it turns out that it's necessary for an animal to suffer pretty much “whenever we say so.” 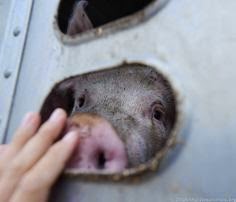 Due in part to pressure from the animal agriculture industry, for example, the criminal code has barely changed in regards to animal cruelty laws in Canada in more than a century. Over 700 million animals are intensively confined here by agribusiness every year. They are subjected to routine practises deemed 'necessary' that would never be tolerated by an aware general public if inflicted upon our beloved dogs. So depleted by their ordeal by the time they are packed onto transit trucks destined for the slaughterhouse, several million un-named individuals arrive there already dead. Bisgould reminds us that for the most part this industry writes its own guidelines and that there is very little government oversight. She asserts that for every story we hear in the news about some atrocity done to a companion animal, “there is an industrial counterpart where that violence is normalized and multiplied by hundreds or thousands or millions of times.”

Moving away from the factory farm model towards smaller scale animal husbandry operations is commonly lauded as a major step in the right direction. But while in this day and age most of us concede that so-called 'farm animals' experience pain, fear, joy and a desire for freedom – a lot like the companion animals we prefer to spare from an early death - we remain reluctant as a society to abandon centuries-old laws that categorized all animals as mere 'things.' In spite of the fact that non-sentient entities like corporations, churches, and even ships have been granted 'personhood' under the law so that they may be recognized as individuals with certain protective rights, the legal status of animals as 'property' here in Canada persists so that they remain powerless - and the humans who would use them may do so freely under the rule of law.

Regardless of how animals are raised, as long as we insist on exploiting their bodies we are reinforcing an industry that guarantees enormous suffering. In “The Dilemma of Humane Execution and Humane Slaughter,” author and Cornell law professor Sherry F. Colb reflects on the fact that even human executions in US prisons are predictably botched on occasion even though each human is executed singly. With over 55 billion land animals slaughtered around the world every year, the sheer volume and speed involved translates into an enormous number of torturous deaths. Colb goes on to acknowledge that while reducing the appearance of suffering in slaughter has the effect of relieving consumer discomfort, it ironically generates more suffering for animals by spurring demand. In contrast to what some farmers would have us believe, she concludes that marketing the concept of “humane” measures for animals is likely to prove more harmful than helpful to animals over all.

Jeffrey Cohan, executive director of Jewish Vegetarians of North America puts it this way, “The reality is, you will never hear spokespeople for the industrial-livestock companies criticize or complain about the 'humane' meat movement. And there's a reason for that. The 'humane' meat movement is perpetuating the idea that it's perfectly OK to kill young animals if you like the way their flesh tastes. And in so doing, the movement is sustaining the industry.”

As a leading source of GHG emissions, water depletion and rainforest destruction, animal agriculture is responsible for cranking up the heat for domestic and wild animals alike. The good news is that shifting to a plant-based diet offers an immediate means of reducing unnecessary suffering in multiple ways. And it's never been easier to find support for transitioning away from unnecessary reliance upon animal agriculture. Feel free to kick the heat up in the following delicious vegan chickpea curry recipe! Visit past columns in The Transition Kitchen blog to access additional recipes, links, and lots more climate-friendly, animal-friendly food for thought.

FOOTNOTE: I should add that when doing research for this article I learned - not surprisingly- that neither the BC SPCA nor the local RCMP recommends vigilante action on behalf of dogs in hot cars. Both institutions are permitted to break a window as required whereas other folks might end up being charged by the owner of the vehicle for damages. Surely the more likely scenario is eternal gratitude for saving a loved one…especially when time is of the essence. The hotline for the SPCA throughout BC is 1-888-703-7722.

Chop onion and sautee in olive oil until lightly browned in a large skillet, add tomatoes, veggie bouillon, garlic and chickpeas with all liquids; season to taste with curry paste, salt and pepper; add sweetener and raisins. Cook gently over medium heat, stirring to avoid sticking until sauce thickens a little. Add optional items, cover the pan to wilt greens over low heat, and serve over either brown rice, cous cous, polenta or quinoa. Bon appetit!